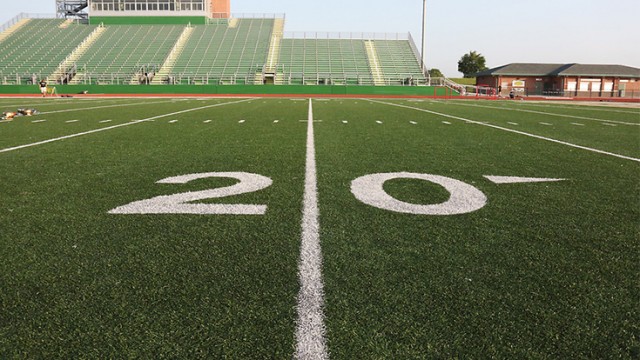 Whenever my son Bradley has concluded a football season, there always seems to be a conversation in our family about what sport to tackle next (no pun intended). Since baseball doesn’t take place until the spring, Bradley is looking for a sport to play during the winter after completing his first year of middle school football. We’re looking into a possible winter indoor football league, but it appears as if Bradley will participate in another sport for his school as well.

At the end of the season, I sent Bradley’s football coach an email thanking him for the wonderful job that the staff did with Bradley and his teammates. The coach wrote back to me saying the staff feels Bradley should be on the wrestling team because it will help him become a better athlete and football player. I know a number of football players that also wrestled, but wrestling is something that is new to our family, so my wife Sheryl and I are doing our due diligence on the sport and how it can help Bradley.

Since my only knowledge of wrestling centers around guys like The Rock, Hulk Hogan, Ric Flair and Stone Cold Steve Austin, I decided to go directly to a couple of experts that can explain why wrestling can be helpful to a youth football player, especially at the middle school level.

“Wrestling has complimented football for many years,” said Edward Modica, the head athletic trainer at Provident PT/St. Anthony’s High School on Long Island (New York). “There are numerous professional athletes in the NFL who have had wrestling backgrounds and they will tell you how much it has contributed to their success in the development of their skills and athletic ability.”

Our family has been involved in youth football for nine years, but wrestling presents unchartered waters for us so we’re listening to what people in the know are telling us. The fact that Bradley’s football coach approached him about it and shared those thoughts with us is tremendous because my wife and I will lend our support to him with anything he wants to try athletically, especially football. After doing some research and talking to people that have experience with this, it seems like a no-brainer for Bradley or any youth football player to participate in wrestling.

“I firmly believe that athletes of all ages benefit from competition,” said Anthony Cracco, head football coach and Athletic Director at Mepham High School on Long Island. “The best football players are true competitors. When you’re out on the mat, it’s just you and your opponent. Wrestling is an environment that creates toughness and perseverance and determination. In addition, athletes improve their speed and agility through participation.”

Since wrestling is an individual sport that places an emphasis on tactical and strategic awareness, mental toughness, physical endurance and explosive and quick movement, there is a parallel to football. Although it’s a team sport, the concepts can be dissected into individual players that engage in one-on-one contact on just about every down.

Bradley has played the center position for the last six seasons and those that I’ve spoken to believe he can benefit from wrestling in a number of ways as well as other players that are in the trenches.

“Some of the best ways wrestling can help football players is their hand placement, their ability to get low center of gravity and their first step explosiveness,” said Modica. “These attributes can enhance the effectiveness of an offensive and defensive lineman as well as a linebacker.”

To take it a step further, there are those that believe wrestling can be a tremendous tool for all football players from top to bottom on a roster, regardless of position or size. That includes players at the skill positions and defensive backs.

“Wrestling benefits all positions on a football field,” said Cracco. “The improved balance, football and core strength is essential for lineman.”

By participating in wrestling, football players can benefit from learning how to utilize hand reaction time and explosive quickness to take control of an opponent, which is a valuable ability to have at the line of scrimmage. In addition, the workouts are said to be better than what you will find in most sports. With an emphasis on cervical strengthening — which can help with concussions — core strengthening and endurance will help an athlete with a quicker change of direction and longer-lasting efficiency.

“I believe that wrestling is a great accompaniment to the football athlete at all levels,” said Modica. “As far as middle school level athletes, it can really build character, mental toughness, maturity and full body strength and endurance. Wrestling is an incredible physical sport, which builds character. It also combines an academic and reactive element, which I believe directly influences the football athlete in a highly positive manner.”

It’s been quite a year of football for Bradley with his first year at the middle school level, participating in the U.S. National Team Middle School Bowl Series and two other football camps. But now that the season is over, he is eager to participate in other sports while also continuing to improve as a football player.

You can’t just play football all year round. It’s suggested by many coaches, administrators, doctors and other medical specialists for a young athlete to participate in multiple sports throughout the course of a year. Unfortunately, there are parents and coaches who push young athletes in the direction of playing just one sport all of the time and that is not necessarily an ideal situation.

“As a building AD, I feel that specialization has hurt our student athletes,” said Cracco. “Athletes need to compete year-round and need to enjoy athletics. Far too often our athletes are pushed to specialize in one sport by travel and outside coaches. This burns athletes out and the majority of college coaches prefer multi-sport athletes.”

My sons Bradley and Jared have played football in the fall, baseball in the spring, hockey in the summer and even dabbled in soccer. There’s no question that Bradley’s favorite sport and passion is playing tackle football. He wants to be the best he can be regardless of where the football journey takes him to and ultimately ends.

Being on the wrestling team will be a huge asset for Bradley, or any youth football player, as he navigates his way toward the 2019 football season.

Peter is a sports anchor for the CBS Sports Radio Network, FOX News Headlines 24/7 and WCBS 880 Radio in New York. His son Bradley is playing middle school football and flag football on Long Island while his younger son Jared plays flag football. Peter, his wife Sheryl and the boys are busy cheering on the New York Jets when they’re not at a youth football field.